Pulsara is all about communication when you have a patient encounter. We offer the ability to communicate vital information about patient status through a variety of ways, including traditional phone calls, text-based conversations, and video/voice calls using Pulsara Calling. This tutorial will cover the following:

How to place a Pulsara Call

To place a Pulsara call, scroll to the "Team" section on the main patient channel, tap View Team to view a list of team members assigned to the patient channel.

To connect with a team member outside of your organization (EMS, tertiary care facility, etc.), swipe the entity names at the top of the screen. Once the correct entity is located, tap on it to display available team members. 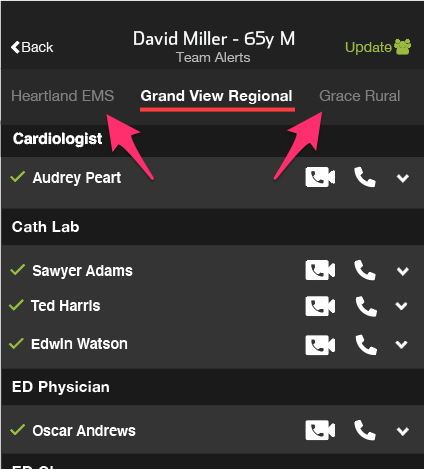 From the Team Alerts screen, you can choose to communicate with a team member via a traditional phone call OR Pulsara Calling. To initiate a Pulsara Call, tap the video camera icon next to the team member's name. 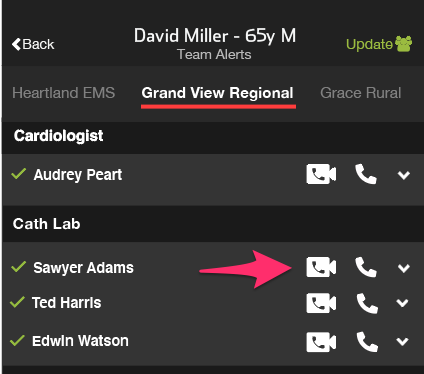 Note: A team member will not appear with the video icon if their device is not Pulsara-Call ready or their entity has chosen to disable Pulsara Calling.

After tapping the video icon, the Pulsara communications platform will attempt to connect you with the selected team member. You may conduct voice only calls, person-to-person video or video conference with 3 or more participants. Pulsara Calls may be placed using either wifi for cellular networks.

Once you have initiated a call request, the recipient will receive an incoming call with a unique Pulsara video ringtone.

Receiving a Pulsara Call on an Unlocked Device

When a device is unlocked and a Pulsara Call is received, you will see a clear indication that there is an incoming Pulsara Call, who the call is from and the option to Accept or Decline.

By default, Pulsara Calls will begin with video on and speaker enabled. Tap to reveal the meeting controls for additional video, speaker and microphone options.

If you’d like to change the default state of your camera and speaker when entering a call, see How to Configure calling options for Camera and Speaker.

Receiving a Pulsara Call on a Locked Device

When a device is locked and a Pulsara Call is received, the below screen is displayed.

Once an incoming call is answered, a screen appears allowing the recipient to change the state of their microphone, speaker, or enter the video.

When this screen is in view, video is off, and microphone and speaker are on. The recipient has two ways to accept the call.

The first option is to tap the video button which will turn on their video and speaker and display video for other participants.

Pulsara Calling offers the ability to add additional participants to an in progress call. To accomplish this, tap the "+" Floating Action Button that appears in the call screen. Once the Invite screen is in view, simply tap the video icon for the person you would like to add to the conference.

On the left is the Invite screen used to add additional participants to the call. The image on the right is the prompt to confirm adding someone to the call.

Once there are three or more participants in the conference, the Pulsara calling screen will update to show all participants, each with their own window showing whether their video and microphone is on or off.

How to Record a Pulsara Call

To start recording a call, select the More menu option in the lower right-hand corner.

TIP: If the More option is not visible, simply single tap the screen to reveal the bottom action buttons

The recording option will not appear here if call recording is not enabled in Pulsara MANAGER for your organization.

When a call recording is started,  every user currently on the call will be audibly alerted stating that a recording is in progress and will receive a popup notification letting them know that the meeting is being recorded. Each participant will have the option to accept the recording and remain in the call or leave the call. NOTE: When joining a call that is in progress and is already being recorded, the same visual and audible prompt is presented to the new call participants.

When a video recording is in progress, a red REC indicator appears in the upper left-hand corner. All users on the recorded call will have the option to pause and stop the recording by selecting the More menu option in the lower right-hand corner.

To pause the recording hit the Pause button

To stop the recording select the Stop button and tap Stop in the confirmation message.

Note: When a recording is stopped, all call participants will hear an audible message indicating the recording has stopped.

Default speaker and camera settings can be configured for Pulsara Calling. These settings are independently configurable for initiating and receiving calls and can be found in Pulsara MOBILE under Settings -> Configure Video and Audio.