Patient Handoffs allow a patient to change units or organizations before reaching the hospital.

A few things to know about managing Handoffs:

In the Requests section the Handoff button will allow you to initiate the handoff in Pulsara.

To initiate a Patient Handoff, tap the Handoff button.

On the Handoff sub-screen, select the name of the EMS Agency that will receive the patient. Your agency will automatically appear in this list so that you can hand off to other units. Other agencies will appear if a handoff relationship has been set up with the agency in Pulsara MANAGER.

Tap the checkbox next to the Unit that will accept the Handoff.

NOTE:
In order for the correct EMS team members to be added to the patient care team, they must specify their EMS team members and Unit for each shift. This information can be specified on the EMS Shift screen during login or later by opening the side menu and selecting EMS Shift. 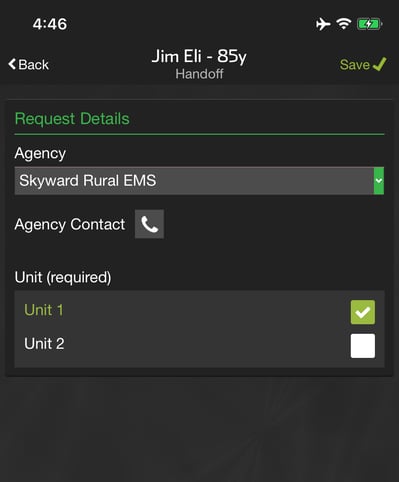 Tap Save in the upper-right corner.

A Confirm Request will appear to share the patient details with the receiving EMS Agency.  Tap Share.

The EMS Handoff is automatically accepted, because it should have already been approved outside of Pulsara.

The EMS Teammates on shift will be added to the patient care team and will start receiving alerts about the patient. The receiving Unit and/or EMS agency along with the new unit will appear on the Team Alerts screen.

The Requests section of the Patient screen will update to reflect the new EMS Agency transporting the patient and the Handoff button will no longer be visible for the initial agency. 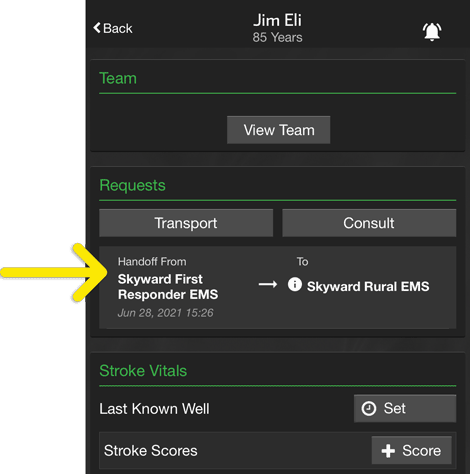 To see the full history of the Patient Transport/Consult, tap on the chevron to expand the records. 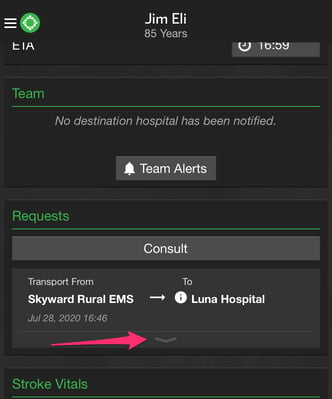 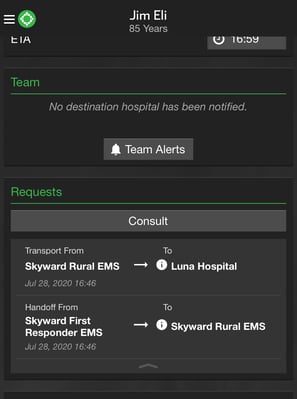 The EMS team that received the patient should then find the patient by name on the patient list and open it. Once the patient is opened. review and set all fields in the EMS area of the screen. 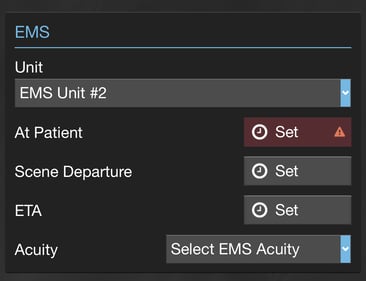 This is an important step for each EMS Team that receives a patient via handoff to ensure the receiving hospital has accurate At Patient, ETA, Departure, Acuity.

Now the receiving EMS Agency/Unit has responsibility for the patient and can initiate a Consult or Transport as needed to continue the patient care.

See the animation below for the process of receiving a patient handoff.